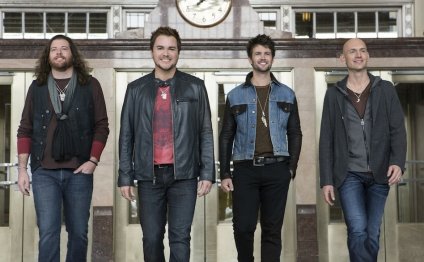 Somewhere in the midst of 10, 000 towns, along a lonely highway between packing clubs in their native Texas years ago and more recently performing stadiums on one of country music’s hottest tours, the Eli Young Band became more than a band. They became a brotherhood. Camaraderie and creativity fused into an intoxicating cocktail that has propelled the talented foursome to the vanguard of contemporary country music.

With three No. 1 hits under their belt as well as a Grammy nomination and an Academy of Country Music Award for Song of the Year for their hit “Crazy Girl, ” the Eli Young Band approached their second Republic Nashville album, 10, 000 Towns, with a sense of confidence and purpose. “We were genuinely excited about making this new record, ” says bassist Jon Jones. “People talk about the sophomore record being really tough to make and in a lot of ways this felt like our sophomore record even though it’s technically our fifth record as a band.”

“We learned over the progression of those records our strong points in the studio, and we were confident, ” adds drummer Chris Thompson, “We knew what we wanted and how to get what we wanted.” It’s been a long, steady rise for Jones, Thompson, lead vocalist Mike Eli and guitarist James Young, but the same four musicians have been together from the start and are now reaping the rewards. They began performing together in 2000 while attending North Texas State University, and honed their skills on the Lone Star state’s competitive music circuit by building a rabid fan base who appreciated their potent live shows and the edgy, passionate indie albums that preceded their major label ascension.

With the 2011 release of their Republic Nashville debut, Life at Best, the Eli Young Band scored their first No. 1 hit with “Crazy Girl.” The double platinum single became the # 1 most played country song of the year on Billboard’s 2011 year end chart and earned them the ACM Award for Song of the Year. The band’s next single, “Even If It Breaks Your Heart, ” became their second No. 1 and was certified platinum. It earned the band Grammy nods for Best Duo/Group Performance and for Best Country Song as well as Single of the Year and Song of the Year nominations from both the CMA and ACM.

After years of paying dues and gaining experience, the Eli Young Band is at the top of their game. While they started playing in tiny clubs, they’ve graduated to packing out theatres and mid-size venues as a headliner. Their road dog reputation helped them to earn an opening slot playing stadiums on the Kenny Chesney tour. All those miles on the road and visits to 10, 000 towns coalesce to make their new album the band’s strongest effort yet. “At this point in our personal lives and in our career, we’re all in really good places, ” Thompson says. “We’re all happy in our personal lives, so it shows on this record; it’s fun.”

“This record was a lot more upbeat than our previous records, ” agrees Young. “We really wanted to record songs that are going to be fun to play live and fun for our fans watching the show. We were thinking about our live show and how these songs are going to translate on the set list. That was a priority in our minds too when we chose songs for this record. We’ve also learned to really follow our gut when it comes to songs and song choices. We’ve always had a good sense of what songs are going to work on the record and which ones aren’t.”

Their meticulous approach to writing and finding the very best songs for the new album paid off quickly as the lead single, “Drunk Last Night, ” became the band’s third No. 1 hit. “We loved that song from the first 30 seconds of hearing it, ” Eli says of the Josh Osborne/Laura Veltz penned song. “With that title, you read it and you think it’s going to be a certain type of song and then you hear the song and it’s not what you thought it would be at all. The songwriters, Josh and Laura, did a really good job of messing with our brains. People were drawn to the idea that it’s not the same ole same ole drinking song. That was intriguing. They did well, hitting you with two hooky choruses, that’s a tricky thing to write. That’s what drew me as a singer to the song.”

In recording 10, 000 Towns, the Eli Young Band gathered songs from Music Row’s top writers, including Craig Wiseman, David Lee Murphy, Jon Randall and Will Hoge, and the band also penned half the songs on the album themselves. “It gets challenging when you’re touring so much to sit down and actually try to write, but we spent a lot of time in 2013 just trying to write however we could, ” says Young. “It was fun for us because the four of us all sat down and wrote for this record which was a great experience, ” says Eli. “All four of us are on ‘Prayer For The Road, ’ ‘Traces’ and ‘Revelations.’ John and James were co-writers on ‘Dust’ while I was co-writer on ‘Angel Like You.’ ‘What Does’ was John, James and I and ‘Last Broken Heart’ was the same. We’ve never had a song on a record where all four of us were songwriters until this album.”

By In the twentieth century in the United States each succeeding generation embraced its own immensely popular, rhythmically…