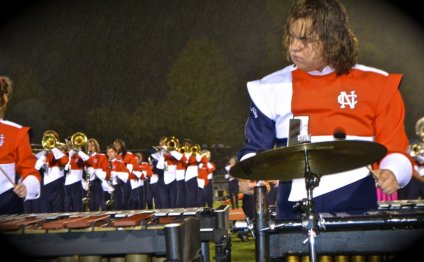 Turn on any college football game this season and you're bound to hear the White Stripes' "Seven Nation Army, " which in the past several years, has become a stadium rally cry. But college marching bands aren't just looking at Detroit garage-rock for inpsiration, and in fact, are more in line with the pop charts than ever. Here's 10 mind-blowing modern covers done by marching bands at these select institutions of higher learning.

Carly Rae Jespen, "Call Me Maybe" (University of California at Berkeley)
When Jepsen’s "Call Me Maybe" was released in February 2012, it was inescapable for the rest of the year, blasting out on every radio, TV, and iPod in three-minute intervals. It’s only fitting that a marching band would absorb the song’s ubiquity into its act. As Cal swings through the chorus, the audience happily sings along and shows that when it comes to the modern hits, people just can’t get enough.

No Doubt, "Spiderwebs" (Iowa State University)
Although No Doubt vocalist Gwen Stefani would go on to utilize the marching band aesthetic more directly with her first solo album, it’s a hit from the band’s third album, Tragic Kingdom, that gets the collegial re-working. It makes sense in a way: Tragic Kingdom found No Doubt transitioning from a high school ska band into one of the biggest rock acts of all time. As a nod to the band's brass beginnings, Iowa State increases the song's horn backing by a hundred fold and takes it from a ska-tinged rocker to a wall of trumpets.

Kanye West, "All of the Lights" (Temple University)
On the fourth single from Kanye's My Beautiful Dark Twisted Fantasy, the rapper doesn't want some of the lights, he wants all of the lights. It's only fitting that Temple blows up the song into its most grandiose form with a version loud enough to fill a stadium. Would Kanye approve … or is this version not big enough?

Macklemore & Ryan Lewis, "Thriftshop" (University of Idaho Pep Band)
Macklemore will be the first to tell you that “Thriftshop” has a serious message but it’s housed in a silly exterior. Acknowledging the song’s anything goes atmosphere, University of Idaho blows that twisting sax line up into a massive, ancient Roman battle cry. The song is also fitting: like the clothes at a thrift shop, most of those sweaty pep band and marching band outfits are in their second, or third, or fourth generation of use, much to the members’ dismay.