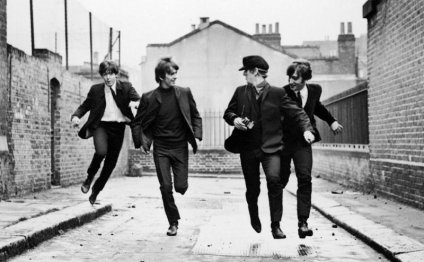 By far the undisputed champions of British music, The Beatles remain legends even three decades after the band broke up. Formed in Liverpool in 1960 they became, and remain, the most influential band of the Rock era and are credited with introducing more pop-music innovations than any other group in the world.

The final Beatles line-up as of 1962 consisted of John Lennon (guitar, keyboards), Paul McCartney (guitar, keyboards, drums), George Harrison (Lead Guitar, sitar, ukulele), and Ringo Starr - Richard Starkey (drums). Unusual for the time, all the band members contributed to the both vocals and the process of song writing.

A short test conducted in 2012 revealed that most British people between the ages of 40 and 60 (even those that weren't Beatles fans) could actually recall and repeat the tunes of at least 80% of all the Beatles Number One Hits including being able to remember at least part of the lyrics.

The originality of The Beatles has been described as extraordinary and never again repeated on the same scale. The exact source of their unique musical style is said to have originated from a combination of skiffle and 1950s rock and roll. The truth is that the evolution of their 'sound' into pop ballads and Psychedelic Rock remains something of a mystery. They are credited with unintentionally introducing the word 'Beatlemania' to the English language and were pivotal in making UK music popular in the USA.

I came across an article online called the Top Celtic Folk/Rock bands . To me the article was a wee bit blurred. It focuses…