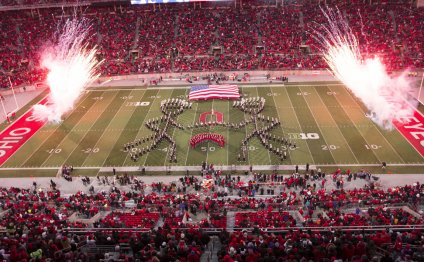 The Ohio State University Marching Band (often called The Best Damn Band in the Land or TBDBITL) performs at Ohio State football games and other events during the fall semester. The 225-piece “Pride of the Buckeyes” is one of the few college all-brass-and-percussion bands in the U.S. and is acknowledged as the largest of its type in the world.

With a history dating back to the late 1800s, many marching band innovations were developed at Ohio State. Among them: floating and animated formations, script writing, and the fast cadence with a high knee lift. The band’s Script Ohio is considered by many to be the most memorable tradition in college band history.

What happens after I make the band?

The hard work doesn’t end after tryouts! After you make the band, you must compete for your spot each week through the challenge process. Each member of the band has the possibility of being challenged by one of two alternates in their row (or from another row of the band if they play the same part). Challenges consist of a mini version of tryouts and whoever wins marches in the show that week.

How can I stay involved with Ohio State bands if I don’t make the OSUMB?

What is the band member cost to be in that band?

Thanks to the support of both the university and our generous donors, the band member costs have reduced significantly. For the most updated information, please contact the band office at 614-292-2598 or email osumb@osu.edu

Do I need to use my own instrument for marching band?

No. You will be supplied with both a practice and a game instrument for use during the marching season.