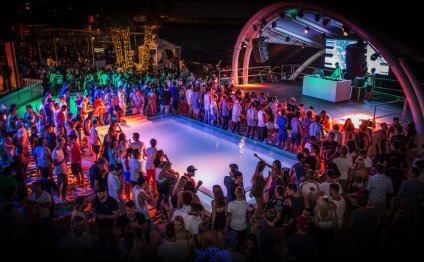 Way back in the mid-1980s, when the disco gods appeared over the Chicago skyline and proclaimed, “Let there be house, ” his acolytes responded, “And let it be deep.” And it was good.

Slower, moodier, and more sensual than most other club-music forms — heir to disco at its most mirrorball-blissful — deep house has survived for nearly three decades, staying mostly out of the spotlight, consigned to warm-up sets and after-hours reveries. But lately, it has bubbled back to the surface.

This month, the soulful sound scored a No. 1 hit on the U.K. pop charts with Storm Queen’s “Look Right Through, ” a ’90s-flavored song by Metro Area’s Morgan Geist and busker extraordinaire Damon C. Scott that was first released on Geist’s Environ label in 2010. It was a more recent remix from ’90s deep-house mainstay MK (Marc Kinchen), and a summer’s worth of heavy club play, that finally pushed it to the top slot, on the back of MK’s recent success with remixes for Lana Del Rey, Sky Ferreira, and Disclosure.

“Look Right Through” wasn’t a fluke. Duke Dumont’s “Need U (100%), ” another U.K. No. 1, has logged more than 17 million plays on YouTube; its plunging bass line and sub-aquatic keyboard stabs are direct descendants of Kerri Chandler’s deep-diving take on New Jersey garage. Disclosure, the year’s biggest dance-pop crossover success story, draw heavily from the deep-house playbook in their lanky grooves and woozy atmospheres. Behind them, there’s a veritable groundswell of deep-house revivalists: Jamie Jones, Maya Jane Coles, Breach, Dixon and the Innervisions crew, Axel Boman, Hot Since 82 — even Bloc Party’s Kele Okereke has plunged into the full-fathom sound.

In fact, 21 of Beatport’s current Top 100 tracks are tagged as deep house. That doesn’t make it the most popular genre on the site, but after big-room electro house, it’s tied for second place with progressive house, and boasts a stronger chart presence than tech house (14 tracks), house (12), indie dance (four), and techno and trance (two apiece). Remember dubstep? That particular wub-genre doesn’t have a single song in the Top 100.

A few years ago, that would have been unthinkable; deep house’s moody pulses were drowned out in a cacophony of lasers and jackhammers and drops. But deep house’s deliberately low profile is beginning to bear out the old meek-will-inherit-the-earth maxim.

Why now? In part, it’s a reaction to the ubiquity of EDM at its most garish and bottle-serviced. Warm, moody, sometimes hesitant, and often melancholic, deep house is the antithesis of mainstream EDM’s harder/faster/stronger ethos, that capitalist ego-topia fueled by cheap presets and dodgy Molly, hell-bent on success. Deep house is contradictory, wracked with doubt, so full of blue notes it bleeds indigo. It’s pro-sadness on the dance floor; pro-pathos in the mix.

Ironically, the success of deep house as an alternative to big-tent EDM has helped it creep towards the mainstream. Pete Tong’s “Essential New Tune” selections increasingly lean toward deep house breakout stars like Jamie Jones and Richy Ahmet, while the rest of his show favors crossover cornballs like Afrojack and Avicii; even trance grandmaster Tiësto now has a weekly deep house radio show on Sirius XM.