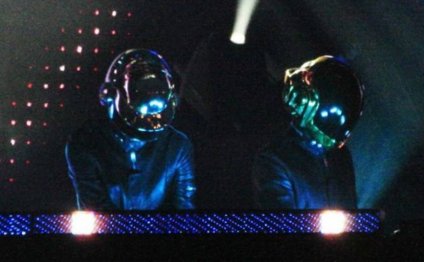 We’re thankful to France for three very important things—croissants, champagne and Daft Punk. Each has changed the world for the better. Of course we appreciate great historical landmarks like the Moulin Rouge and the can-can dance, but we’d rather highlight the hexagonal nation’s people who have changed dance music far beyond view of the Eiffel Tower. These artists, producers and DJs are some of France’s greatest contribution to dance music. Get to know the major players. Oui, oui.

Years later and we’re still feeling the “Love Generation” over here, but Bob Sinclar (born Christophe Le Friant) had a long career before that track charged up American clubs and Bar Mitzvahs alike in the late aughts. The Yellow Records founder says his musical style is inspired by “peace, love and house music.” As a bonafide celeb in his home country (he’s on billboards in the Paris Metro) and a draw for Victoria’s Secret models who like to dance, Bob is the man.

Brodinski
Brodinski is a master of a wide range of genres. His DJ sets and productions include influences from techno to bass heavy house and melodic minimal to some of his most popular work in hip-hop. Since the start of Bromance in 2011 he’s released 18 solid EPs, and still always indulges his diverse interests and collaborations. He helped produce two songs on Kanye West’s Yeezus and has a close working relationship with rapper Theophilus London. His debut album is currently (and finally) in the works.

Cassius
As Cassius, Philippe Zdar and Hubert Blanc-Francart have defined the mix of pop appeal and underground groove that just about every electronic act has aspired to since then. They began their careers in hip-hop, making beats for MC Solaar, transitioned into trip-hop and then created the seminal hip-hop/funk/electro EP Ravers Suck Our Sound before discovering the rave and diving head first into house and techno. Nothing’s been the same since.

Daft Punk
These robot-headed Frenchmen changed what it meant to make electronic dance music – not just within the confines of France, but around the world. Inspired by everything from Rolling Stones to Nile Rodgers, the duo of Guy-Manuel de Homem-Christo and Thomas Bangalter made a house synth-pop combination that the world didn’t even know it was waiting for. Plus, those robot helmets! Two decades (and a handful of Grammys) after these Frenchmen took us “Around The World, ” they’re still going strong, innovating and helping us lose ourselves to dance along the way. If France can only give us two gifts, they would be the Statue of Liberty and these forward-thinking robots.

David Guetta
Whether you love David Guetta’s addictive tracks or hate him for getting the chorus to “When Love Takes Over” stuck your head, the man is undeniably huge. In 2009 he sold more albums outside of France than any other French artist and, he has a decade of Ibiza-storming “F**k Me, I’m Famous” releases to his name, and was DJ Mag’s #1 DJ in the World in 2011. Since then, Guetta’s been the face of festival-ready house music the world-over. He might just be the most well-known name in dance.

Dimitri From Paris
He might have been born in Turkey, but Dimitri wants you to make no mistake—he is from Paris. Born Dimitrios Yerasimos, Dimitri got his start DJing for major European radio station CFM in the 80s. Soon, he introduced the first ever house music show broadcast on French airwaves and was making reworks and remixes for the likes of Björk, New Order and James Brown, while also producing runway soundtracks for Chanel, Jean-Paul Gautier and Yves Saint Laurent. These days you can catch one of the few remaining high-profile disco DJs at his Glitterbox residency in Ibiza.

DJ Mehdi
A French great gone too soon, DJ Mehdi was a hip-hop and house producer with strong scratch and mashup tendencies. He DJ’d for various French rap groups before collaborating with acts like Daft Punk, Cassius, MC Solaar and even Chromeo. He basically created the now ever-present hip-hop/disco blend before dying in a tragic accident at his home in France.

Etienne de Crecy
Etienne de Crecy’s claim to fame is his Beats 'N' Cubes live show, during which he performs from the middle of a giant flashing—you guess it—cube. During his 20-year-long career Crecy has released over 30 EPs and done remixes for artists like Kraftwerk, Moby and Zombie Nation. Etienne de Crecy is French house.

Feadz
Feadz is synonymous with Ed Banger Records and has spent over 15 years making some of the most fun electronic music in Europe. His technical finesse and encyclopedic knowledge of house and techno are a wonder in and of themselves, but he is perhaps best known for his work with his ex-girlfriend and underground electronic darling Uffie. What’s the most surprising is after those 15 years in the game, he only released his first album this January. It was appropriately wonderful.

François de Roubaix
François de Roubaix is often considered the father of what was later called the “French Touch.” Using synths and recording in a home studio, a rarity at the time, he wrote pieces for French movies, commercials and TV jingles—before electronic music was confined to the club. His work influenced world-famous producers like Air, Sébastien Tellier, Rob, Chateau Marmont and the 1970s were basically cradled by his music. He’s often compared to famous Italian composer Ennio Morricone.

Jean-Michel Jarre
The late 70s were when French electronic music pushed through to mainstream success with the likes of legendary electronica/ambient producer Jean Michel Jarre and his unforgettable song "Oxygene 2." Today, Jarre’s shows are packed with 65-year-olds watching him play the Theremin. Recently, rumors leaked about a possible collaboration between Jarre and Justice, but it never went down.

Joachim Garraud
Joachim Garraud DJ’d live from one of the Seven Wonders of the World—the Egyptian pyramids on New Years Eve Y2K. For that fact alone, no list of French dance music-makers would be complete without him. Garraud built his empire as a French house DJ and quickly linked with fellow hometown hero David Guetta. The two co-wrote and co-produced Guetta's album Just a Little More Love, which included "Love Don't Let Me Go, " the soundtrack to all your teenage dreams and the two went on to create the F**k Me I'm Famous label. He plays keytar at his shows and sometime’s wears an alien mask. It’s pretty epic.

Justice
Xavier de Rosnay and Gaspard Augé were the beginning of the French Touch 2.0. They burst onto the scene in 2006 with a shining remix to Simian’s “We Are Your Friends” quickly followed with the unforgettable D.A.N.C.E EP and a critically acclaimed debut album in 2007. They’ve managed a perfect rock inspired electronic sound that took American audiences by storm and quickly become one of Ed Banger’s most popular acts.

Laurent Garnier
Laurent Garnier brought acid and techno to Paris with his residency at Rex Club, a former rock club, and so began the explosion of the French Touch. As the French media was focusing on drug and rave scandals following the late 80s and 90s free party boom, Garnier promoted techno music as the PLUR sound it was always supposed to be. Still as prolific and boundary-pushing as ever, Garnier has five different albums coming out on five different labels this year.