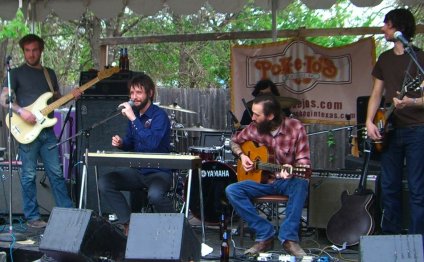 I saw the southern/Indie, country rock band Band of Horses live at the Lincoln Theatre, a huge concert venue in Washington, D.C., in February 2014. I've been a fan of Band of Horses ever since they first hit the music scene in Seattle a good decade ago, so I suspected it would be a good show. The four person band, led by singer Ben Bridwell, sure knows how to entertain an audience. Short on talk and long on music, the show was enjoyed by me and everyone I could see in the distance.

They began by singing "Is There a Ghost" and that made the audience go crazy. After that, they did songs from each of their albums, including Cease to Begin, which is my favorite. The best song, in my opinion, was "Heartbreak On The 101, " a soulful and dramatic song that tells a heart-wrenching story. The show concluded with "No One's Gonna Love You, " which probably would have resulted in a standing ovation if everyone wasn't already on their feet.

It's not hard to understand why Band Of Horses has such a huge fan base and worldwide recognition. Quite simply, they're good, and so was their show. If you have the chance to see them perform, do it because it's pure, soulful entertainment.

Are you ready to watch TWILIGHT: ECLIPSE in theatres this June? Musicnotes.com is pleased to present you with sheet music…