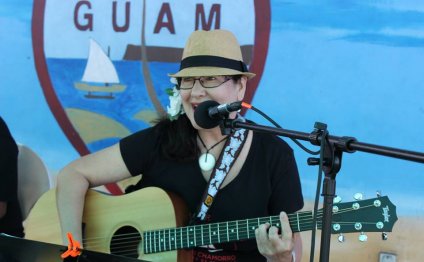 The sounds of modern Chamorro music are diverse ranging from older style batsu, jitterbug and cha cha to country and western, disco, rock and roll and island-style reggae. Most recently, a new form of Chamorro music is being created to accompany the modern versions of ancient Chamorro dances that are gaining popularity on the island. In addition to its entertainment value, Chamorro music has become one of the primary vehicles for the perpetuation of Chamorro language in the now English-language dominated popular culture of Guam.

Guam has two local radio stations which focus almost exclusively on Chamorro music and there is another in the Commonwealth of the Northern Mariana Islands (CNMI). The genre has also developed a substantial market in the mainland United States wherever Chamorros from Guam and the Northern Marianas have settled.

An active community of musicians perpetuates the genre by continually producing new albums and playing live at Chamorro dance clubs and parties as well as such contemporary institutions as the twice weekly “Night Market” at The Chamorro Village complex in Hagåtña. It has also been adopted by hotels and many of Guam’s commercial outlets providing both locals and tourists an ambiance that reflects the island’s unique cultural identity.

Although most Chamorro music today is influenced by outside cultural influences that have come to Guam in the post-World War II era, contemporary Chamorro musicians perpetuate a cultural practice with a lineage that goes back to ancient times.

Music has been an important cultural element in the lives of the indigenous peoples of the Marianas since the islands were first settled about 4, 500 years ago. While much of the information about these years has been lost, the first European visitors during the 16th and 17th centuries made note of the importance of music in various cultural practices on the island.

Various sources mention a call-and-response type of singing that took the form of poetic debate which has come to be known as Chamorrita or Kantan Chamorrita. This is a competitive form of singing in which one chanter wins when the other can no longer come up with a response. The use of this art form ranged from playful teasing to the instigation of war. It is not clear today what these melodies sounded like but it is likely that the “Gumupu si Paluma” melody which is used in contemporary Kantan Chamorrita evolved from one of these ancient melodies.

There were also other forms of chants, and like most Pacific cultures, chants and songs were used both to tell stories and to preserve important knowledge.

Kustumbren Chamorro is the name for syncretic indigenous culture that developed in the Marianas through over 200 years of Spanish colonial rule. The Spanish era was a time when Chamorros converted to Roman Catholicism and incorporated its rituals into their daily lives. It was also a time when Chamorros were influenced by the Filipinos, Mexicans, Spanish and others who came to the island for various reasons and sometimes married into the local population.

All of these influences shaped the music of the islands. In addition to foreign rhythms and melodies introduced by missionaries, settlers and visitors, new musical instruments such as the guitars, pianos, violins and harmonicas undoubtedly changed the tonal values of Chamorro songs. During these years many of the earlier forms of music were lost or transformed, but new music introduced from outside influences was embraced and transformed by Chamorro musicians.

There were various forms of music on Guam during these years. Perhaps the most dominant in everyday life was music associated with the practice of Catholicism as found in the Catholic Mass, novenas, and rituals surrounding the Catholic sacraments of baptism, marriage and death. Many of these religious songs are still sung today by Chamorro speakers.

There were also many folk songs that told of daily life on Guam, of hardships, of love, and whatever else came to the minds of songwriters. Others songs were simply adaptations of popular western songs. One of the most popular songs in pre-WW II Guam was “Hagu i Flores, ” a Chamorro version of “You Are My Sunshine.”

Many such songs went hand-in-hand with dance and so conformed to the rhythms of the two most popular Spanish dance styles: the Spanish Waltz (batsu) and the polka (so’tis), dances that maintained their popularity into the early American period. The cha cha and the jitterbug would later become popular with the first post-WWII generation.

Although the culture of Guam changed considerably over the years, the ancient practice of Kantan Chamorrita continued to be perpetuated by skilled practitioners throughout the island’s Spanish Era (1668-1898) and Naval Era (1899-1941).

Ancient folk songs, arranged in quatrains of two octosyllabic couplets, which, according to some writers, are composed on a single melody, the variations depending on the individual style of performance. The distinctive features are spontaneous improvisation and a dialogue performance between two or more people, depending on the occasion or function.

Another popular form of Chamorro music was the serenada (seranade). Men would sing these songs to their love interests as a form of courtship. Seranadas were also commonplace at family gatherings as they were the perfect settings for relatives to get together and sing. This custom can possibly be traced to Spanish times but soon died out after WWII.

Through almost three years of Japanese administration during WWII, many Chamorros were forced into a more “traditional” lifestyle as they moved to their ranches in hopes of limiting contact with Japanese soliders.

The Chamorro language, whether through song or simply spoken, served the people as a language of resistance since it could not be understood by the Japanese. Popular songs such as “Ramon San, ” “Senindan” and the English language song “Sam, Sam, My Dear Old Uncle Sam” kept Chamorro spirits alive at this difficult time in history.

We’re thankful to France for three very important things—croissants, champagne and Daft Punk. Each has changed the world…