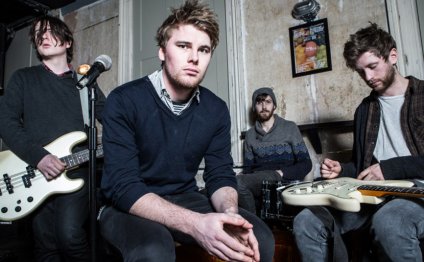 Girl Band, as you may well guess, are male. They are also a Dublin noise-rock quartet so young that the guitarist has to fit this tour around his sixth-form homework. Their name may make them "le groupe le plus difficile à googler de 2014", as the French edition of Vice put it in a review of their single, Lawman, but they're worth the effort of tracking down.

For now, the only way to do it is to go to their under-constructed website or to catch an infrequent gig, such as this tour-opening show in Brighton. It starts entirely as it means to go on: even as they tune their instruments, feedback howls through the amps, setting us up for 40 minutes of looped squawks and hums, played at a volume that nigh-on cracks the brickwork of the railway arch venue. Drums and bass add layers of dissonance, and the icing on the cake is Dara Kiely, whose raging-bull vocal style is descended from Iggy Pop and Nick Cave.

Kiely is the most interesting part of the setup, transmogrifying from a schoolboyish sort in a jumper and jeans to a clawing, slurring ball of venom. It's not easy to catch the words, but fragments such as "my interest in violence" and "I used to be good-looking" are intelligible, along with the whole lyric to You're a Dog (which seems to be "You're a dog! You're a dog!"). Red-faced and bug-eyed, Kiely is a classic angst-monger, lolloping toward oblivion as drummer Adam Faulkner beats out a martial tattoo.

Cave's old band, the Birthday Party, come to mind more than once tonight, but so do Daft Punk. Girl Band profess to be influenced by the French duo, and there's just enough of a danceable bass undertow to justify their claim. Yet no one dances – this visceral, invigorating music is greeted with a dazed silence, one that suggests Girl Band are on the right track.

Relive tonight’s memories in the years to come! Wander around and look at the WW II aircraft and memorabilia. Enjoy a meal…