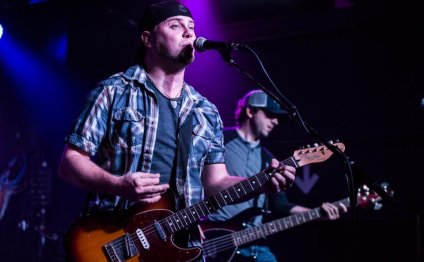 Our apologies to Brantley Gilbert, but today’s country music is not as country wide as he claims. It’s actually limited to about 18 states, a half-dozen of which really dominate what we hear on country radio. Put a pin on an American map for the city of origin of every artist with a song on this week’s Top 50 airplay chart and you’ll find that — to borrow the title from an awful Lindsey Lohan movie — Georgia rules!

This Georgia country music crew has sold over five million albums in 2013! That’s about 27 percent of the total sales of country’s Top 100 albums of the year. If you add pins for Georgia-born songwriters, the map grows even denser.

Tennessee (six) and Texas (five) are next most country-populated states, with the most artists inside the Top 50 as of Nov. 13, but aside from Miranda Lambert and the Band Perry, there’s not nearly as much star power (again, this is just using artists inside the Top 50 right now). Will Hoge (Nashville) is enjoying his first taste of radio success, while Dustin Lynch (Tullahoma, Tenn.) and Eric Paslay (Abilene, Texas) are still newcomers.

Artists from these three states make up over 40 percent of active songs on the radio. The Carolinas also do well with five artists (most notably Eric Church and Darius Rucker), and the east coast of Florida is (oddly) well-represented with three artists, including Jake Owen, FGL’s Brian Kelley and Cassadee Pope.

The rest are scattered about the southeast and southern midwestern states, with a few northerners (seven, including northern California’s Jon Pardi) finding room. (Note: Australian-raised Keith Urban is a Top 50 artist currently. He’s not on the map for obvious reasons). A different week might spread the pins out some, but this is a pretty good snapshot of where our music comes from. There’s no Minnesotan who’s taking time off right now.

At first, this data is shocking. One wonders if there’s some inherent prejudice, or some major back-scratching or regional nepotism going on. Where is the international influence? Even Canada has been blacked out for several years. Some of these concerns may be valid, but the fact is, the situation is a vast improvement on where we were 20 years ago.

Take a moment to view the below map of pins from the top country artists of 1993. Forty nine singers and groups made up the Top 100 songs of that year. Only 13 states are represented, with 20 artists from Oklahoma (seven) and Texas (13) together. That’s over three times as many that come from these two important states today.

North Georgia — not south Georgia — made its mark then with six artists, including three from Marietta. Kentucky also shoned with six singers inside the Top 100, including Patty Loveless, John Michael Montgomery and Billy Ray Cyrus.

It’s not unusual for a geographic area to dominate a genre. It happened with rock (the London Invasion, Seattle’s grunge movement) and hip-hop (Atlanta, both coasts). But three things are interesting to point out from these maps.

First, if you’ve ever said everything on the radio sounds the same, you may have found a valid explanation. Any perceived homogeneity can be fairly attributed to a shared geographical influence. This isn’t meant to slam southern Georgia artists, many of whom share similar fanbases. You just can’t argue with success.

The second observation is that YouTube, social media platforms and more accessible transportation are indeed making our country music world smaller. It’s supposed to be easier for someone living in Bliss, Idaho to get noticed for his or her voice and command of a brilliant song, and that seems to be happening — although country fans are more reluctant to allow this than pop and rock. Reality television is also a factor in country music’s glacial expansion.

The final takeaway is more of a question. What happened to shift the balance of power away from Oklahoma and Texas? In 2013, new songs from Oklahomans like Reba McEntire and Vince Gill bounce off radio programmers’ desks like they’re made of rubber. Others have given up or retired, meaning their crew (songwriters, producers, musicians) also have become less influential. Texans like Mark Chesnutt and Clay Walker (both from Beaumont) also struggle, and frankly, so has George Strait. Two of his last three singles have been the worst-charting songs of his career.

The music of a country Georgia Caucasus

List Criteria: Only country singers or bands. No other genres One of the most distinct and popular American art forms is…