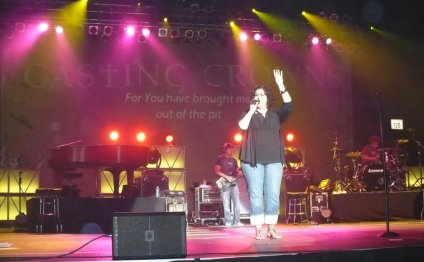 Amy Grant, who has also been known as "The Queen of Christian Pop" was born in 1960 in Augusta, Georgia and grew up in Nashville. She is the best-selling Christian music artist EVER! That means she beats out all of those male Christian artists!

She has won several awards and even has a star on the Hollywood Walk of Fame for her contribution to the entertainment industry. Some of Amy's most popular songs include, Thy Word, Lead Me On, Baby Baby, Every Heartbeat, Takes a Little Time, Breath of Heaven (Mary's Song), and Better Than A Hallelujah.

Amy was offered her first recording contract just weeks before her 16th birthday and performed her first ticketed concert while a freshman at Furman University. Her breakthrough album, Age to Age came out in 1982 with the her first major hit, El Shaddai.

In the mid-80s, Amy surprised her fans with a more mainstream sound as she tried to broaden her audience. And then in 1991, when Heart in Motion (her best-selling album) came out, her music was frowned upon by many in Christian circles. Amy was criticized for being too "worldly and sexy."

At the end of her decade of pop music, Amy filed for divorce from her husband, Gary Chapman to whom she had been married to since 1982. Together they had three children, Matthew, Gloria and Sarah. Less than a year later on March 20. 2000, she married country super star, Vince Gill.. They have one daughter together, Corinna Grant Gill.

In 2002, Amy returned to her Christian music roots with the release of her album, Legacy...Hymns and Faith. In 2007, she had her first book, Mosaic...Pieces of My Life So Far published. 2007 also marked her 30th year in music and her induction into the Christian Music Hall of Fame.