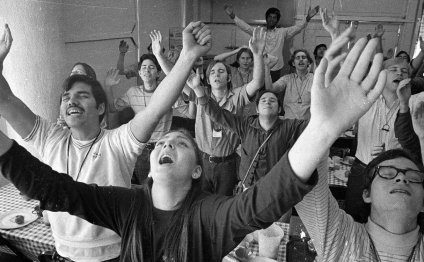 Derek Webb's old band, Caedmon's Call, was once the darling of the contemporary Christian music (CCM) industry. Their eponymous debut, released in 1996, sold over 250, 000 copies, and their follow-up, 40 Acres, sold about 100, 000 more. Caedmon's Call's live shows frequently sold out, and really broadened CCM's demographic. You were as likely to see college students as their parents at Caedmon's Call's shows.

"We had some very unexpected success, very early, " Webb explains. "We backed into a moment of success we could have never anticipated. But a wise man once said to me, 'The two things that will ruin an artist are success and failure. And especially in that sequence.'"

Today, Caedmon's Call is a dusty afterthought of a bygone industry. Chances are you've never heard of Caedmon's Call. But the band's story is an interesting microcosm, if not a metaphor, of CCM as a whole. In CCM's heyday, approximately 50 million CCM albums were sold annually. In 2014, that number had plummeted to 17 million. CCM Magazine has long since ceased printing issues, and modern Christian songwriters struggle to penetrate the masses, outside of writing worship songs for church gatherings.

The descent of CCM is a reflection of America's waning interest in Christianity as a whole. The precipitous dropoff in CCM sales has left Christian labels and artists staring into the void alongside their pastors, scratching their heads, wondering where they went wrong.

The birth of CCM can be traced back to the Jesus Movement of the late 1960s, and was shepherded through its infancy by God-fearing hippies like Larry Norman. But it didn't really take off until more than a decade later, as a result of early pioneers like Andrae Crouch and Amy Grant. Grant was especially revelatory, a comely teen whose lyrical vaguaries left it a very open question as to whether she was singing about God or boys. It was a potent strategy, and it led to several Billboard-topping singles and the first Christian album to ever go platinum. Her fame would boost the fortunes of her keyboardist, Michael W. Smith, whose CCM career would go on to become nearly as influential as Grant's.

As these spiritual singers became superstars, they proved that CCM could be more than just something record stores stocked to appease area youth pastors; it was big business. This laid the foundation for the next wave of faithful crooners, including Phil Keaggy, the Newsboys, Steven Curtis Chapman, and Jaci Valesquez. Jars of Clay's inescapable 1995 hit "Flood" made huge waves on college radio. Petra packed out global arenas and sold nearly 10 million albums. Together, these artists helped CCM become one of the fastest growing music genres in America, with many bands finding crossover appeal among both spiritual and secular listeners.

"Back in the '90s, you could believe that Jesus Christ was God and create art that was still interesting, and the general market would respond, " says Kevin Max.

He should know. After all, he spent the '90s as a member of dcTalk, unquestionably the decade's greatest CCM success story. Formed in 1989 as a hip-hop trio, the group morphed into a grunge act following the success of Nirvana's Nevermind, and promptly started recording double platinum albums. In 1997, it wasn't unusual to find dcTalk songs on MTV or Billboard charts, making them one of CCM's most prized commodities: a Christian band that also appealed to the culture at large.

In retrospect, it's not hard to see why. The group had an ear for alt-rock aggression that never quite lost its pop sensibilities, and channeled it all into a genuinely thrilling live show. If you ignore the ecclesiastically minded lyrics (a sampling of song titles: "Jesus Freak, " "Into Jesus, " "So Help Me God"), you might guess you were listening to some pretty good Stone Temple Pilots B-sides.

Amy Grant, the singer who first made a name for herself as a Christian singer, then crossed over into the pop genre, sat…

Every fall, Christian record companies send out their new Christmas albums for review. This year, music fans are blessed…