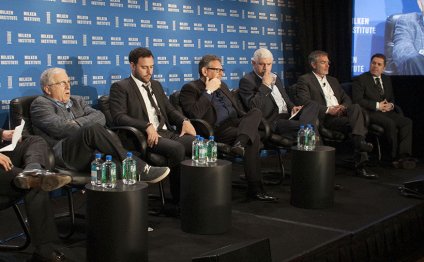 It's not easy to pick a band name. After 60 years of rock & roll, everything has been taken. There's the Eagles and the Eagles of Death Metal, the Who and the Guess Who. There's Asia, Europe, Chicago, Boston and Kansas. If you want to pick a color and an animal, there's already White Lion and Whitesnake. If you like the word "wolf, " get in line behind Wolfmother, Wolf Parade, We Are Wolves and Howlin' Wolf.

All this said, there's simply no excuse for picking a truly horrid band name, and rock is littered with them. Here are 13 bands with horrible names. Please note we aren't saying these bands suck, just their names. That'll become abundantly clear when you see the last group on the list.

The Devil Wears Prada
This Ohio-based Christian metal band picked their name one year before the 2006 adaptation of the Lauren Weisberger novel hit the big screen, but it's still a stunningly stupid name for a group. It was already one of the most popular chick-lit books in years.That's like calling your band Jurassic Park in 1992 or Gone With the Band in 1938. The group swears they picked it only to signify that materialism and consumerism is the path to hell, but it just makes people think of Meryl Streep and Anne Hathaway. It's frankly quite shocking no label or manager made them rethink the decision. It's also a wonder they weren't sued, but maybe it means every time they play, a group of women in their mid-30s line up thinking the movie is playing.

Natalie Portman's Shaved Head
The 2005 movie V for Vendetta wasn't quite the massive box office success the filmmakers were aiming for, but it did introduce the the world to the Guy Fawkes mask commonly used by the activist group Anonymous. It also gave a bunch of high school kids from Seattle a really, really bad idea for a band name. Natalie Portman has no hair in V for Vendetta, so they named their band Natalie Portman's Shaved Head. Against all odds, the band became pretty popular even though they were hobbled by this horrid name. In 2010, they came to their senses and changed their name to Brite Futures.

"We chose our band name on a whim when we were still in high school, " they said in a statement. "And 'Natalie Portman’s Shaved Head' has seen us through an unexpectedly amazing four years . . . But now it is summer once again, and time for a change. Also, it has recently come to our attention that our muse Ms. Portman is not so keen on us using her name in ours . . . so we feel it is time to move forward with a new name. We are Brite Futures."

The band broke up two years later. Turns out their futures weren't so brite.

Toad the Wet Sprocket
The guys on Wayne's World once made a list of singers and bands that sound like the male sex organ. High on their list, right near CeCe Peniston (I believe it even won), was Toad the Wet Sprocket. To be fair, the group took their name from a fictional band briefly mentioned in a Monty Python skit. But John Cleese finding some nonsensical/vaguely sexual name funny doesn't mean you have to spend nearly 30 years touring and recording as Toad the Wet Sprocket. That's not say they're a bad band. They just made a bad decision back in 1986 and are stuck with it forever. They could always change their name to Brite Futures. That name is free now.

Dogs Die in Hot Cars
Before we make fun of their name, let us say that this Scottish band has a very well-meaning lesson in their name: dogs do die in hot cars. Please, never leave your dog alone in a car for anything length of time over a couple of minutes. Cars get very hot in parking lots, even if you roll down the window. That comfortable, once air-conditioned vehicle becomes an oven. Please, please, please, don't leave your dog alone in a car.

Killing in the name(cover)HD-Screwdriver Rock Band