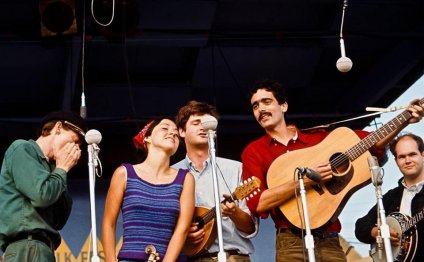 I was down in Savannah
Eatn' Cream and Bananas
When the heat just made me faint
I began to get cross eyed
I thought I was lost
I'd begun to see things as they ain't.
As the relatives gathered to see what's the matter
The doctor came to see was I fine.
But the doctor said give him jug band music,
It seems to make him feel just fine.

I was told a little tail about a skinny as a rail
L.A. put cowboy with a headache
He was hung up in the desert swappin' rats
And tryn' ta get a drink of water with his knees gettin' mud caked
And I'll tell you and acceptance how he stumbled into Memphis Tennessee
Lookin' hard and gettin' dust baked.
We gave I'm little water, a little bit of wine
He opened up his eyes but they didn't seem to shine
And the doctor said give him jug band music
It seems to make him feel just fine

So if you ever get sickly
Get sister run quickly to the dusty closet shelf
And pull out a washboard, and play a guitar chord
And do a little do it yourself.
Call on your neighbors to put down their labors
And come and play the hardware in time
Cause the doctor said give him jug band music
It seems to make him feel just fine

I was floatin' in the ocean
Greased with suntan lotion
When I got wiped out by a beach boy
He was surfin' when he hit me but jumped off his board to get me
And he dragged me by the armpit like a child's toy
As we staggerd into land with all the waiters eatn' sandwiches
We tried to mooch a towel from the hoi poloi
He emptied out his eardrums, I emptied out mine
And everybody knows that the very last line is

At the onset of the Roaring 20s and even during the Great Depression, the best big bands had the ability to get people to…

Lesson Plan by, Coordinator of Music Education at the University of Nebraska at Omaha. Dr. Berke received both her Bachelor…