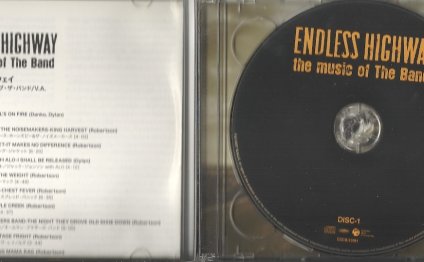 Endless Highway the Music of the Band

The track list for the Band tribute album first revealed here in July has been finalized. "Endless Highway: The Music of the Band, " is due Jan. 30 via 429 Records, an imprint of the Savoy Label Group. The set is led by My Morning Jacket's cover of "It Makes No Difference, " recorded at Band drummer Levon Helm's home studio in Woodstock, N.Y.

Also featured is Jakob Dylan's "Whispering Pines, " Death Cab For Cutie's "Rocking Chair, " Jack Johnson's "I Shall Be Released, " Gov't Mule's "The Shape I'm In" and Gomez's "Up on Cripple Creek." John Hiatt teams with the North Mississippi Allstars for "Ain't No More Cane, " while the Allman Brothers Band covers "The Night They Drove Old Dixie Down."

"Picking a song from their catalog was like looking at your group of close friends and deciding which one is 'the closest, '" My Morning Jacket drummer Patrick Hallahan told Billboard.com. "You find that they're all 'the closest' in their own relative way. We hold that song in the utmost reverence. It's not only one of the saddest love songs ever written, but more importantly highlights the beauty of Rick Danko. His delivery on that song is one of the first reasons I fell in love with the Band in the first place."

Blackie and the Rodeo Kings - Endless Highway (The Band ...

On occasion, I get emails asking how the big bands came about and what caused them to fade from prominence. This is a difficult…

Indie-folk emerged during the early 21st century, when songwriters from the indie rock community began taking their cues…