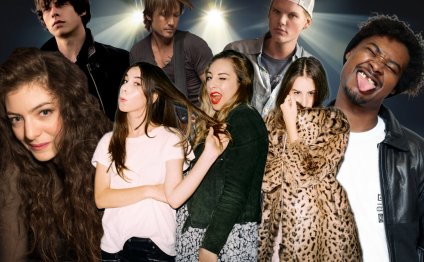 Had you heard of Lorde at the end of 2012? Could you rattle off a Chance The Rapper verse this time last year? Did you know that the No. 1 Hot 100 song of 2013 would be a debut single that included the phrase "dookie brown leather jacket"? That's the beautiful part of popular music: every year, a crop of fresh-faced artists challenges the veteran brain trust with new ideas, bold sounds and compelling background stories.

Check out our list of the 10 breakout stars of 2013 - the artists who might not have been household names when the year began, but now are as unavoidable as the biggest names in music.

With one pissed-off pop anthem, Swedish duo Icona Pop graced "Girls, " soared into the Top 10 of the Hot 100 chart and got to pump their fists on nearly every single television program that features musical performances. But Icona Pop was more than just "I Love It": "This Is… Icona Pop, " the debut album from Caroline Hjelt and Aino Jawo, proved to be a surprisingly durable affair, and the ladies followed the fall album release with the announcement that they'd be hitting the rode next year on Miley Cyrus' North American tour and then Katy Perry's U.K. run. Icona Pop already has one hit that you can't dislodge from your brain, and the duo's next act is in full swing.

Chance The Rapper still has yet to release a proper debut album - a mind-boggling fact, to some degree, considering how many people have already anointed the Chicago native the next great hip-hop artist. But one listen to this year's "Acid Rap" mixtape provides plenty of proof that the helium-voiced, ever-outlandish rapper has the charisma and storytelling panache to remold his genre. "Acid Rap" led to critical acclaim, scores of new fans and collaborations with artists like Lil Wayne and Justin Bieber. Who knows what his debut LP can do?

The three Haim sisters had been murmured about within the indie-rock sphere by the end of 2012, thanks to charming early singles like "Forever" and "Don't Save Me." In 2013, HAIM simply extended that winning streak with a level of consistency almost unheard of for a collection of rookies: from sterling follow-up cuts like "Falling" and "The Wire, " to the slicing performances at summer festivals and on "SNL, " to the pinpoint songwriting of debut album "Days Are Gone" (which enjoyed a Top 10 debut on the Billboard 200 chart), HAIM tended to make musical artistry look very easy this year. Next up: an international tour that will continue (with a lot of dates already sold out) through late spring.

Another year, another "EDM breakout artist, " right? Yet Disclosure was something entirely new, and largely devoid of the bass drops that have guided their peers. "Settle, " the debut album from brothers Howard and Guy Lawrence, borrows from house and dubstep, but the best moments are pure, playful pop, like the arresting cries of "Latch" or the propulsive clanging of "White Noise." And although "Settle" is not rock music, the brothers Lawrence are now rock stars, commanding crowds that would have been unimaginable a year ago, while generating interest from dance diehards and novices alike.

During a year in which country music bolstered an already-strong roster of male stars - we see you, Luke Bryan, David Nail, Tyler Farr, Jake Owen, Dustin Lynch, Justin Moore and many others! - Kacey Mugsraves released some of the most affecting pieces of personality in the genre. "Same Trailer Different Park, " released last March, was highlighted by tales of broken homes and hard-fought happiness, and Musgraves' delivery thoroughly sold each story. After earning New Artist of the Year at the CMA Awards, Musgraves has a chance to claim Best New Artist at the Grammy Awards - one of her four nominations this year.

Florida Georgia Line released its debut album, "Here's To The Good Times, " last December, but it wasn't until 2013 that the good times really started rolling for Tyler Hubbard and Brian Kelley. "Cruise, " aided by a remix with Nelly, was one of the most undeniable singles of last summer, and darted into the Top 5 of the Hot 100 chart; follow-up singles "Get Your Shine On, " "Round Here" and "Stay" were all hits in their own right, establishing Florida Georgia Line as one of the most promising newcomers in country.

At the beginning of 2013, Ariana Grande was a Nickelodeon star still searching for an entrance into the music world; now, the 20-year-old is a budding pop giant who, oh yeah, is a TV star too. Before her debut album, "Yours Truly, " debuted atop the Billboard 200 chart in September, Grande's single "The Way" (featuring Mac Miller) notched a surprising Top 10 debut on the Hot 100 and garnered endless comparisons to one of Mariah Carey's sumptuous 90s jams. "Yours Truly" was a star-making effort, and with Grande already working on the follow-up, look for more awe-inspiring performances - like her "Tattooed Heart" rendition on the American Music Awards - to occur in 2014.

They are the best at what they do ….and they are Africa’s hottest R&B Stars Have you ever entertained the thought…