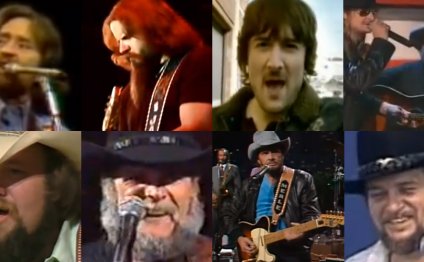 Outlaw Country was one of the more significant trends in country music in the '70s. During that decade, many of the most popular hardcore country singers of the '60s - from George Jones to Merle Haggard - softened their sound slightly, moving away from their honky tonk roots. While the outlaws weren't strictly honky tonk - they were as much storytellers in the tradition of folk songwriters as they were honky tonk vocalists - they kept that spirit alive. Outlaws didn't play by Nashville's rules. They didn't change their music to fit the heavily produced, pop-oriented Nashville sound, nor did they go out of their way to fit into the accepted conventions of country music. Instead, they created an edgy form of hardcore country that was influenced by rock & roll, folk, and blues. Ironically, two of the leading figures of the movement - Waylon Jennings and Willie Nelson - had their roots in the music industry, but by the time they came into their own as recording artists in the mid-'70s, they had developed a unique, defiant way of performing. Several other musicians - including David Allan Coe, Billy Joe Shaver, and Tompall Glaser - followed in their footsteps, and the outlaws were quite popular for a period of three to four years. At the end of the '70s, the urban cowboy movement easily eclipsed the outlaw movement in terms of commercial appeal, but the outlaws had a lasting influence. During the '80s, certain neo-traditionalists owed a bit of their sound to the outlaws, while a whole breed of songwriters, led by Steve Earle, demonstrated a massive debt to the outlaws and their fusion of country, folk, and rock.

Country Music Outlaws,Oh and One BadAss