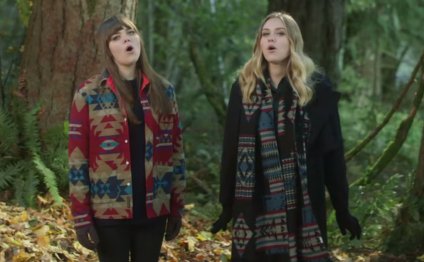 Sisters Klara and Johanna Söderberg, who together comprise the group First Aid Kit, have made sparkling, bright-eyed folk-pop music that’s turned them into heroes in their native Swede and has captured the attention of artists including Patti Smith and Conor Oberst along the way. We caught up with the duo backstage at Austin's Fun Fun Fun Fest to talk about their increasingly busy tour schedule, their nerves while writing their most recent album Stay Gold, and their willingness to use curse words when it matters.

A couple years ago you guys were going on your first ever American tour, now you’ve been going back and forth across the country all the time. What’s that like? How has touring changed for you?

Klara: Yeah it’s weird, we’ve been doing this for seven years. It’s gone by so fast.

Johanna: I think a lot of our friends are just kind of starting their careers, and figuring out what they want to do, but we’ve already been doing our thing for so long. We’re in a different place than a lot of people.

Does your family still come out with you guys when you tour?

Klara: Yeah our mom and our brother were out here during this last tour, and our dad is always our sound guy. But he’s not driving us around anymore, we have a bus now. We were actually in a van for a really long time. We were playing these big venues and still driving a van. I’m really happy we did those tours when we did them though, it was great to actually see where you were. Now we just kinda wake up and play the show. It was great to do that back when we were super excited to be in the states.

ON-KEY: Johanna at the Sasquatch Music Festival at The Gorge on May 24. (Photo: Suzi Pratt/FilmMagic)

You mention that your dad does your sound, and he used to be a musician back in the day. Does he still give you advice?

Klara: He’s been to all of our shows, he’s been such a part of it. I don’t think he can give any outside perspective at all.

Stay Gold came out earlier this year, and it did very well obviously. But I wonder was it nerve-wracking for you two going in to record the follow-up to The Lion’s Roar just considering how successful that was?

Johanna: Yeah definitely, you kinda just have to forget about all that. It wasn’t until we started writing for ourselves that it started to come together.

Klara: I think we had some writer’s block in the beginning. We definitely felt the pressure, we’d be lying if we didn’t admit that. I mean The Lion’s Roar was an experiment just to see if we could keep doing this. It’s tricky but it worked out in the end.

SING ON: Johanna (left) and Klara at the Berlin Festival on Sept. 8, 2012. (Photo by Frank Hoensch/Redferns via Getty Images)

The song "Master Pretender" is the first time you two have recorded the word "f-k" or "shit." Why the move towards profanity?

Johanna: I mean, honestly, we swear a lot, that’s how we talk. On that song we just needed to get the point through.

Klara: I think that’s what so nice about it, it’s only on that song and in that one line. We’re from Sweden where swearing isn’t a big deal. You can say ‘f-k’ on the radio. We don’t have that sort of relationship with those words.

A lot of people might think you two are similar — that you dress similarly and have similar taste in music. How true is that though?

Klara: In terms of what we like and enjoy we’re pretty similar, but personality-wise we’re quite different. We’ve developed different roles in the band in order to work together.

Johanna: I’m more of the annoying secretary who takes care of the emails. Klara is the creative genius. (Laughs.)

CLAP TO THIS: Johanna Soderberg at the Latitude Festival on July, 19, 2014. (Photo: Matthew Baker/WireImage)